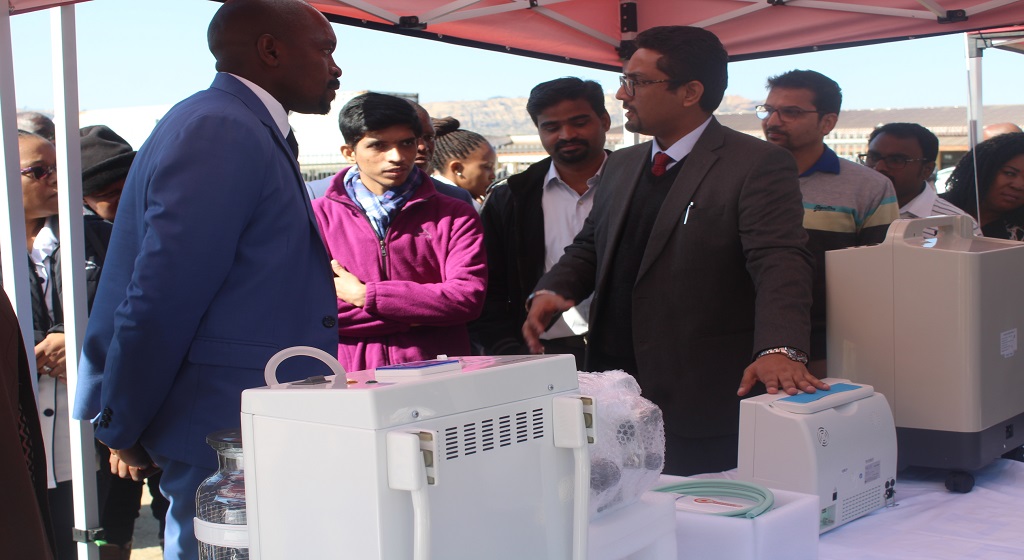 The Ministry of Health received a M50 million worth of medical equipment from the Indian Virobien Healthcare company.

The handing over ceremony was held at Sebaboleng in Maseru on Thursday last week..

When accepting the equipment, the Minister of Health, Mr. Nkaku Kabi commended the ministry’s staff for their cooperation and joined effort which he said resulted in the procurement of the medical equipment in India, saying the ministry had realized that health facilities lack the required medical equipment to deliver services.

He promised to embark on site visit countrywide as a follow up to ensuring that the equipment has been distributed and installed in desired various destinations.

He therefore thanked the Virobien company for its cooperation and patience during the procurement process, which he said took more than a year to become a reality.

The Minister disclosed that some of the equipment will enable the refurbishment of Motebang and Mafeteng district hospitals as regional referral centres, adding that help Basotho specialists in diaspora to conduct scheduled service rounds in Lesotho now that the new equipment has been installed.

Also speaking was the Virobien Healthcare Director, Dr Vineet Arora who said the equipment would go a long way in strengthening health services in Lesotho and empowering staff whilst improving the provision of health services for the betterment of Basotho’s lives.

He said the two biomedical engineers commissioned for two years would be of service to the ministry for an additional year to capacitate local engineers such that the equipment lasts longer.

On the other hand, the Director General-Health Services, Dr ‘Nyane Letsie commended the ministry’s staff for the success of the process which she commented could not have been achieved if they (staff) did not contribute in making the initiative a success. She said the equipment will reach as far as the hard to reach areas of Lesotho.

Dr Letsie said the health system has for a long time been yearning for this equipment, which its lack had resulted in unfavourable situations that contributed to high infant and maternal mortality, noting that this could have been prevented if there was necessary equipment in place.

She therefore thanked the Minister of Health  for working hard to ensure that the equipment was finally procured.

On the other hand, the initiative is further expected to elevate the current burden on Queen ‘Mamohato Memorial Hospital (QMMH) as only special cases would be referred to the facility.

The 20-container shipment from India will meanwhile see the last three containers of the lot arrive this week.

Present at the event included the Indian Honorary Consular to Lesotho.