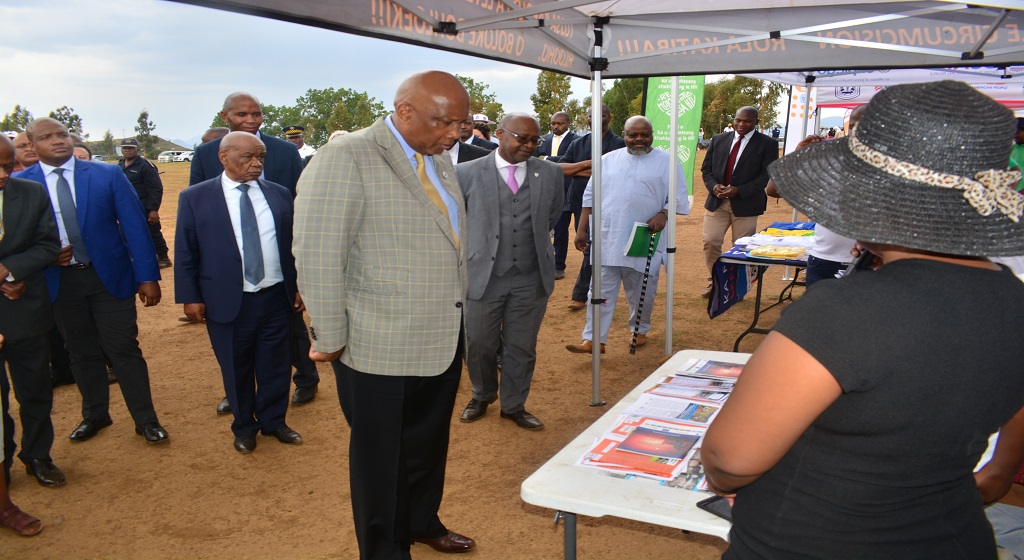 His Majesty King Letsie III says promotion of a HIV/AIDS free generation can only be influenced by pursuing behavioural change.

His Majesty made these remarks during the commemoration of the World AIDS Day held on Friday at Sefikeng High School in the Berea district.

The theme for this year is ‘Communities Make the Difference’.

As part of the day’s activities, His Majesty launched the new HIV/AIDS policy, which is intended to focus much on total eradication and ending of the epidemic.

Speaking at the commemoration, His Majesty said this year’s event reflects back where Basotho nation used to love and care for one another hence urged Basotho to take an opportunity to acknowledge all the efforts of community stakeholders and international partners for joining hands on fight against HIV/AIDS.

His Majesty noted that there is still a long way ahead to eradicate HIV/AIDS, however saying there is a notable progress made on issues concerning 90/90/90 strategy, which targets for HIV diagnosis, treatment and viral suppression.

He commented that as all are about to enter the New Year, having started 90/90/90 strategy; the expectations of reaching such projected targets are high.

He further appealed to Basotho as individual and collectively to strive for a positive change and work hard and fight against HIV/AIDS so that the second report on Lesotho Population-based HIV Impact Assessment (LePHIA) would show more progress.
His Majesty remarked that the 2006 HIV/AIDS policy focused on prevention, but this of 2019 came up with strategies to eradicate the infection, thus expressing hope that by 2030, Lesotho will be an HIV/AIDS free generation.

He said the world has turned to be dynamic in various areas of life and as a result, it is wise to keep reviewing some policies so that they could suit challenges of the current situation.

Sharing the same sentiments, the Prime Minister, Dr Motsoahae Thomas Thabane said without community engagement in the fight against HIV/AIDS, no progress will be made, noting that HIV/AIDS has been a global health issue, which requires people to join efforts with one objective.

Dr Thabane said the government has established a number of HIV/AIDS prevention strategies such like Prevention of mother-to-child transmission (PMTCT), Voluntary medical male circumcision (VMMC) and now they are launching HIV/AIDS policy, saying they will continue with rehabilitation programmes.

He said much has been learned from the past, saying the 2019 HIV/AIDS policy will serve as a guide to achieving Sustainable Development Goals (SDG’s) by 2030.

Speaking at the same occasion, the United States of America Ambassador to Lesotho, Mrs. Rebecca Gonzales said it is gratifying to honour the World AIDS Day with Sefikeng community, adding that by so doing every year is meant to renew commitment to ending the burden of HIV/AIDS and to honor those who have lost lives to the disease.

Ambassador Gonzales said World AIDS Day is important and matters because human beings have a fundamental right to live a dignified life, saying people have power in their hands to save lives and reach epidemic control.

She stressed that in so doing, human lives will be transformed globally as World AIDS Day is about empowering people thus affirming that this disease does not have to be death sentence as it used to be.

She expressed her happiness over America’s long-standing commitment to Lesotho, adding that over the decades; the Unite States has contributed more than six billion to this fight including more than 1.3 billion in the current fiscal year.

Also speaking was the National Aids Commission (NAC) Board member, Mrs. Maseabata Ramathebane who remarked that this year’s theme came at the time when Lesotho has made quite considerable steps in HIV/AIDS response starting from communities at grass roots.

Mrs. Ramathebane said the National HIV/AIDS Strategic Plan 2018/19 and 2022/23 programme results stipulate that at least 40 percent of the HIV/TB response is led by community and that 30 percent of the budget is implemented through the community system.

She added that Districts Aids Plans will soon to be developed to suit the district challenges and establish ways to deal with such challenges, saying decentralisation of HIV/AIDS services is no longer going to be a story but become a reality that many countries will envy.

Furthermore, the new policy focuses more on involvement of leadership that is decisive, inclusive and accountable to stir the HIV/AIDS response, whilst championing the health services for all.

The Lesotho Network of People Living with HIV and AIDS (LENEPWHA) representative, Mr. Mochai Mochai said the day marks the 33 years of commemorating World AIDS Day in which he said progress made is a sign of hope that fight against HIV/AIDS will soon be defeated.

Mr. Mochai said such success is all about dedication and hard work hence they highly commend the international partners for their support in the fight against the pandemic.

As part of the day’s activities, His Majesty led a candle lighting activity with the aim to remember those who have fallen along the line of battling HIV/AIDS or being infected.