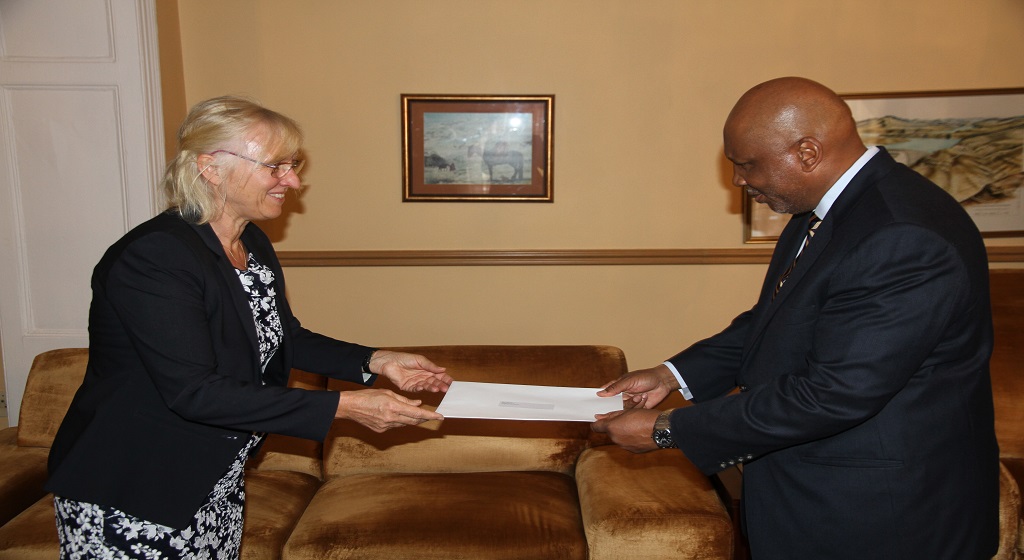 His Majesty King Letsie III on Thursday accepted letters of credence from the Ambassador of Norway to Lesotho, Ms. Astrid Emilie Helle at the ceremony held at the Royal Palace in Maseru.

Accepting letters of credence from Norway, His Majesty said the presence of Ambassador Helle in Lesotho is a testimony of the desire and commitment of the government of Norway to maintain and further strengthen the existing bonds of friendship between the two countries, saying indeed their two sister countries are among the few countries of the world that have upheld the system of governance of a constitutional monarchy.

His Majesty said he therefore believes both countries should capitalise on this common factor to further enhance the cordial relations that already exist between their kingdoms and further strengthen economic ties for the mutual benefit of their countries and peoples.

He said their common membership to international organisations such as the United Nations (UN), Food and Agricultural Organisation (FAO), World Health Organisation (WHO) and the Africa Nordic group among others necessitates that they should consult, work closely together and share common positions in various international fora as well as tackle the global challenges that their countries are confronted with in particular the climate change phenomenon, which he said knows no borders and as such adversely affects global socio-economic development.

He further expressed gratitude for the generous support and assistance which Norway continues to provide to Lesotho through international organisations such as global partnership for education, global alliance for vaccine and immunisation and UNAIDS, saying Norway’s unwavering support has enabled Lesotho to make visible strides in the development of the people as well as in combating HIV and AIDS pandemic.

His Majesty said it is their firm belief that cooperation in the mentioned and other sectors to be identified and duly agreed upon by their two countries will bring about closer collaboration for the betterment of the lives of their peoples.

He therefore assured Ms. Helle of the necessary assistance and support from the government and the people of Lesotho during her tenure of office in order to make her tour of duty fruitful, rewarding and enjoyable.

Presenting her letters of credence, Ms. Helle said Norway and Lesotho recognise the importance of the rule of law both nationally and international, saying the two countries are staunch supporters of the multilateral system and both countries remain responsible and committed members of the international community.

‘If we are to solve the greatest challenges of our time, we need more not less multilateral cooperation. We need to strengthen our bilateral dialogue on topics such as achieving the Sustainable Development Goals (SDGs), reform of the UN, climate change and free trade and in this regard we commend Lesotho for recently taking on the responsibility of being a member of the African Union (AU) Peace and Security Council. This highlights our common interest in promoting international peace and stability,” she said.

She said Norway recognises the challenges Lesotho is facing with regard to the HIV /AIDS epidemic, poverty reduction and the recurring droughts that put severe strain on the people and the economy, therefore commending the work Lesotho and its international partners are doing to overcome these ordeals.

She added that as Mountain Kingdoms, their countries are blessed with beautiful scenery and natural resources, saying they both produce most of their electricity from renewable hydroelectric energy and that they have a thriving fish farming industry and have shared experiences on how to fish farm.

Furthermore, she commented that trade and investment between the two countries could certainly be increased, noting that every Autumn the Nordic Africa Business Association (NABA) Summit takes place in Oslo thus stressing that it is the most important business conference dedicated to Africa in the Nordic countries and that the NABA Summit presents an opportunity to promote business opportunities in Lesotho to Nordic investors.

The Ambassador pledged her firm support and commitment in her endeavour to further develop and strengthen many close and friendly ties between the two countries, saying she is confident that in execution of her mission, she will benefit from His Majesty and his government’s support.

Norway is a core supporter of the many of the big international organisations and funds that undertake and support important programmes in Lesotho. The vaccine alliance GAVI, the Global Partnership for Education, UN Women, UNAIDS and the UN Central Emergency Relief Fund are among common partners