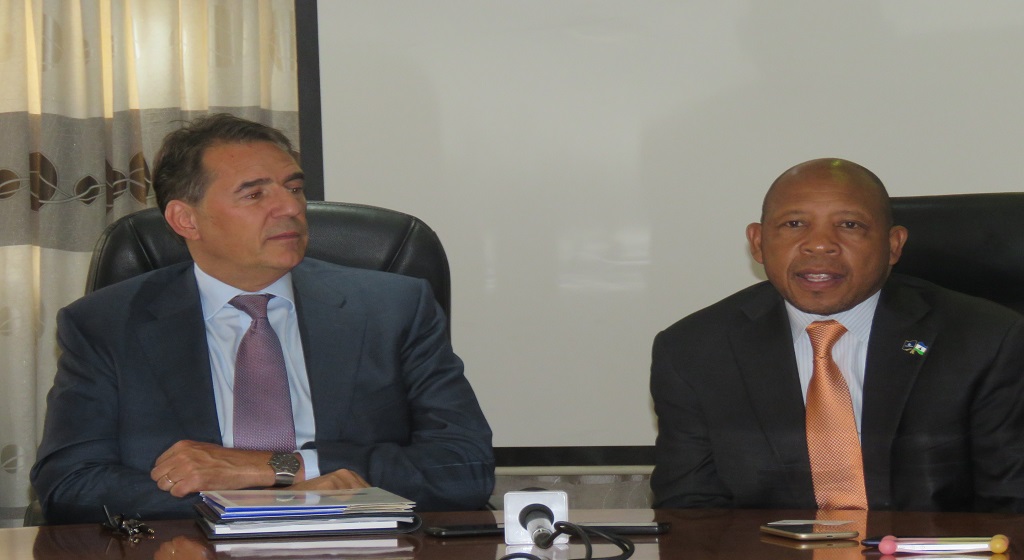 The Ministry of Finance and the European Investment Bank (EIB) signed M1.3 Billion loan agreement for financing of the Lesotho Lowlands Water Development Projects II (LLWDP II), zone six and seven at the event held at the Ministry’s Boardroom on Thursday.

He said the money will be paid for zone six and seven construction of water supply in Mafeteng and Mohale’s Hoek, adding that the LLWDP II will also include Maputsoe and Hlotse.

He therefore urged the communities living in these districts to be ready.

Also speaking, Mr. Diederick said signing of the agreement strengthens the existing relations between Lesotho and the European Union.

He said the project will increase the reliable supply of bulk potable water and sanitation services, adding that it will strengthen the water authority’s capacity to operate and maintain the infrastructure.

He further mentioned that the project will provide a sustainable water supply service to the population as well as to help service providers to better cope with climate change impact in the project area.

“Lesotho is increasingly feeling the impact of climate change, especially when it comes to extended droughts as water scarcity constitutes a major barrier to economic development and inclusive growth” he remarked.

He added that water development project in the lowlands is intended to provide a sustainable water supply for the local population and is expected to have a positive impact on about 300,000 direct beneficiaries.

The Minister of Water, Mr. Samonyane Ntsekele expressed gratitude on behalf of Basotho over the gesture.

“What is left now is the implementation process, which will see availability of water in these districts” he said.

The Project is expected to commence in June this year.

LLWDP II is the second phase of the Lesotho Lowlands Water Supply Scheme that was conceived with technical assistance from EU. The EIB has previously financed the first phase known as the Metolong Dam and Water Supply Programme.