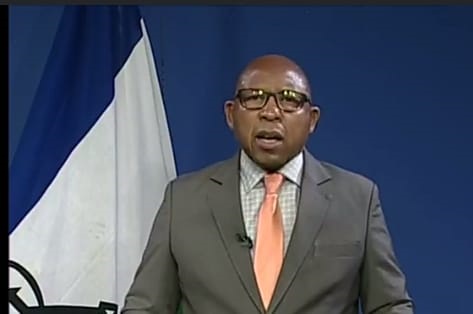 The Prime Minister, Dr Moeketsi Majoro on Sunday announced during his national address that the country moves back to Blue Colour Coding Stage starting midnight of Sunday.

The Prime Minister said recent reports indicate that the rate of infections has declined hence the Council of Ministers have decided to move the country to Blue Coding Stage.

Moving back to Blue Colour Coding Stage means that the country will be exposed to relaxed COVID-19 restrictions that include among others; the operation of nightclubs, schools and institutions of higher learning on a rotational basis still adhering to COVID-19 guidelines.

He said the curfew will start from 12:00 midnight to 04:00 am, noting that businesses like restaurants will operate with 50% for sit-ins until 10:00 pm still adhering to the regulations while ensuring that people are screened and they register with Identification Document (ID) and vaccination certificates, saying this will also apply to the taverns.

Dr Majoro announced that for the first time since the country imposed lockdown, the nightclubs are allowed to operate, and only people vaccinated will have access to nightclubs but will operate until 11:00 pm with 50 percent capacity.

He said issuing of vaccination certificates and IDs at the selected businesses will be in operation from November 01.

The Prime Minister further noted that sports spectators are also permitted with the provision of vaccination card and ID, adding that gyms are open for not people exceeding 50.

He announced that international travels are allowed, noting that departing and arriving tourists must observe COVID-19 protocols which includes providing a 72 hours negative certificate.

However, he noted that initiation schools remain closed, saying this is until all involved parties in running the schools have set COVID-19 rules that will allow them to resume their operation.

He also mentioned that industrial actions such as protests, and picketing remain prohibited.

In conclusion, the Prime Minister announced that African Vaccine Acquisition Trust (AVAT) has sent 150 000 vaccines and they are expected to arrive in the country before the end of this week.

He said the country has so far vaccinated 20 percent of the country’s population, stressing that Lesotho is among the leading African countries that have doubled the target of the African Union.

He appealed to Basotho to get vaccinated as this will help the country to combat the pandemic, adding that they should also continue to abide by COVID-19 recommendations such as washing hands with clean water and soap and wearing masks all the time.