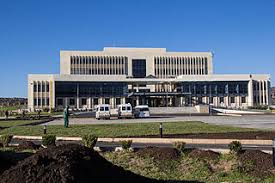 The National Assembly on Tuesday unanimously adopted the Ninth Amendment to the constitution, with a view to protecting the life of parliament and its stability.

The motion was proposed by the Leader of Popular Front for Democracy (PFD), Adv. Lekhetho Rakuoane and was seconded by the Member of Parliament for Mahobong, Mr. Mothetjoa Metsing.

Adv. Rakuoane said the purpose of the motion is to protect the life of parliament as well as to strive for peace and stability of the country.

He commented that the country consecutively held two snap elections thus in 2015 and 2017 which he said led to the country spending huge amounts estimated to a tune of M3 million on elections, saying on top of that, government was also forced to pay members’ loans twice in less than five years.

“This is a lot of money which could have been used for developmental projects instead of using it on snap elections and their consequences, commenting that it is an open secret that the third snap elections are looming,” he commented.

Adv. Rakuoane said this is due to the country’s west minster electoral model from the United Kingdom, saying it is high time that the tenth parliament reduces the powers bestowed to the Prime Minister to use his prerogative if he loses a motion of no confidence or decides to advice to His Majesty the King to dissolve parliament and call for fresh elections within three months.

He said the amendment to sections 82, 83 and 90 which he said gives the Prime Minster more powers to prorogue parliament for a period of twelve months need to be reduced to only two months, as well as prevent the country from holding  fresh elections if the incumbent (Prime Minister) resigns or dies.

“The motion will protect the economy of the country, promote stability as well as the banks and the pension fund in the country as the members will not take their pension monies early before the their five year term,” he said.

He therefore appealed to all members from both opposition and government to support the motion, adding that they need to engage each other to reach consensus and not be motivated by emotions when making decisions.

He however noted that democratic principles still need to be adhered to, citing Members of Parliament decision to propose a motion of no confidence whenever they feel there is a need.

The Lesotho Congress for Democracy (LCD) leader added that if the motion is passed, it will also prevent floor crossing, noting that it will still need the two thirds majority of the members to amend the Constitution.

Also speaking was the Leader of the House, Dr Monyane Moleleki who said the motion was a precedence towards the national reforms process which the country is undertaking.

He therefore described the motion as a milestone since Lesotho gained her independence in 1966, saying it will be one of the main achievements of the tenth Parliament.

“The country is going to reform the  Constitution and the motion is already a step ahead and therefore need to be supported,” he remarked.

Dr Moleleki said the country needs to adopt a culture of dealing with issues of national interests before they become a crisis  like engaging in talks  when some people are in exile,  saying the culture of talks should also be practiced in individual political parties to maintain peace and stability.

He therefore appealed to all members to support the motion, saying it is not the first time the government support the motion from the opposition, citing the motion that was tabled by Mr. Metsing regarding the establishment of the ad hoc committee to investigate the wool and mohair saga.

Members from both the opposition and the government supported the motion.