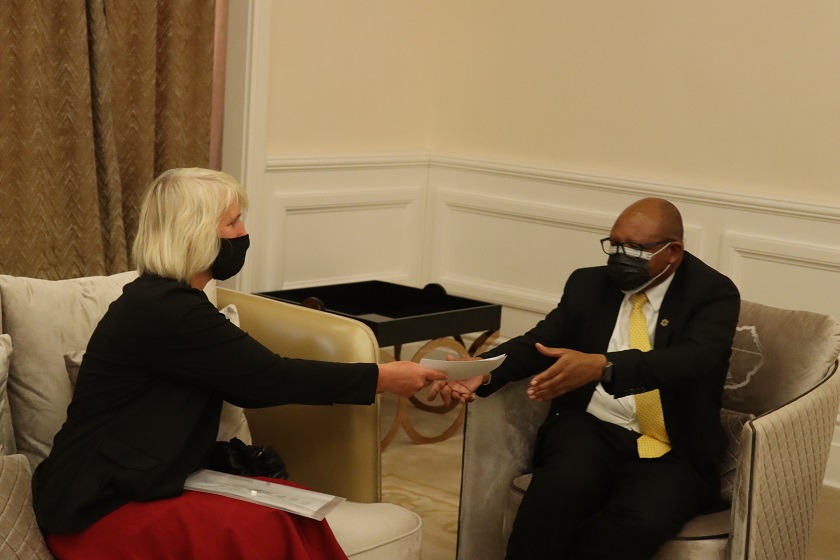 Dr Majoro’s invitation was disclosed during the courtesy call by the High Commissioner of the United Kingdom of Great Britain and Northern Ireland to Lesotho, Her Excellency, Ms. Anne Macro on the Prime Minister on Monday.

Handing over the invitation, Ms. Macro said the invitation came from the Prime Minister of the United Kingdom of Great Britain, Mr. Boris Jonson.

Ms.  Macro commended Lesotho for taking part in protecting the environment as the part of Climate Change Mitigation Strategy.

She, therefore, emphasised the need for Lesotho to participate in the upcoming Leaders’ Summit for Technical and Capacity Building.

He thanked Dr Majoro for his leadership saying she knows how he feels about Climate Change.

Giving his remarks, Dr Majoro accepted the invitation, saying this is significant to Lesotho as the country suffered from environmental damage in January hence this is an opportunity for her (Lesotho) to participate in this summit.

He expressed appreciation that the United Kingdom has re-selected Lesotho for a residential, saying there are problems with embassies serving Lesotho from Pretoria thus “out of sight out of mind,” he commented.

The World Leaders’ Summit will also mark the beginning of the 26th UN Climate Change Conference of Parties scheduled for Glasgow.